History of the club

BRFC was formed in the early l900's. The team have played the majority of their competitive football in the South Devon League with a large slice of that being in the Premier division.

Until the mid 1960's, BRFC shared their pitch with the rugby and cricket clubs at the Recreation Ground. 1960 saw the cricket club purchase the ‘Rec’ for themselves and BRFC moved to their present playing ground at Duckspond. With the exception of three seasons in the early 80's when a collapsed water culvert meant the club had to seek temporary accommodation, Rangers have played there ever since. BRFC’s patron, Carl Throgmorton of Westward Developments, gave his consent for the teams to use his pitch at Oaklands Park during the culvert catastrophe. The club still retains the use of Oakland Park, which is regularly used by the 3 rd X1 and the youth sides for pre-season and friendly games. During the 1980's Rangers made history by becoming the first club in the S.D.L to install floodlights up to match standard. This was the start of an impressive development at the Duckspond grounds, which boasts a large clubhouse that regularly hosts weekend entertainment. The clubhouse facilities include a snooker room, skittle alley, T.V. lounge, games and function rooms and is for many local residents the social place of choice in Buckfastleigh. During recent years Rangers has enjoyed league, promotion and cup success. The teams have successfully won the Lidstone, Greenaway, Harry Treeby and the impressive Devon Senior Cups. Promotions have also been gained and at the end of the 1991-92 season, the clubs teams were positioned in the premier, division 2 and division 5 of the South Devon League. At the beginning of the 1992-93 season Rangers became the founder members of the Devon County league. Rangers became the Champions of the Devon County league at their first attempt while the 3 rd X1 finished top of their S.D.L division 5 and the reserves finished third in division 2, only being denied automatic promotion on goal difference. 1994 - 95 season was notably a successful one for Rangers when the reserves were crowned champions of division 2. Over the years BRFC have played hosts to other league clubs including Torquay United, Plymouth Argyle, Watford F.C and Leyton Orient.

Do your online shopping here and help support Buckfastleigh Rangers FC by buying products and services through their FREE fundraising site sponsored by Age Matters.

By making purchases at this site you can help us to continue and to further build the success of our club. We don't take part in sports gambling so we can't advise you about important things you should know about the bet365 promo code.

The Social Club was opened on the 28th August 1978 by Mr Frank O'Farrell , and it started off as a very small building. The building was then extended by building new changing rooms outside and using the existing changing rooms to extend the clubhouse. Due to increasing demand another extension was built. It was originally a function room, committee room and children's play room upstairs with two snooker rooms downstairs. Later on this changed and one of the snooker tables was sold and the other table was brought upstairs to replace the children's play room. The two rooms downstairs were then used for storage. In August 2006, the committee were approached to lease the rooms downstairs. In September 2007 Little Ducklings Nursery finally opened. We have a large bar area, with a range of draught beers, real ales, bottled beers, soft drinks, spirits and wines run by trained and professional bar staff. Find the adress. We also have a large function room available for private functions, which also plays host to the committees entertainment consisting of, disco's, theme night's, karaoke's and live music. We also have a full size snooker table and skittle alley, pool table, dart boards, fruit machine, juke box and a large projector and screen in the bar area.

We don't provide betting services but you can access casino for real money at bestrealmoneycasinos.co.uk through your mobile device.

The Skittle Alley was officially opened on Boxing Day 1983 by Mr Carl Throgmorton, which is now used to house a successful in-house skittles league with 6 teams. We also have darts teams in the Mid Devon Darts League, the Newton Abbot & District Ladies Darts League and have a record four teams in the Buckfastleigh Town Darts League. We have a community feel with members from the local area, however new members are always welcome, as are guests as temporary members. We have a strong base of life members and annual members and the committee would like to thank them for their continued support.

The game at Duckspond started brightly with both sides having a chance in the opening exchanges. It was Village, though, that got the opener after ten minutes when a mistake in the Rangers defence handed a glorious chance to left winger Shaun Wills, who capitalised and gave his side the lead. 1-0. As the rain drove down, Rangers drove on and created the better of the chances in the remainder of the half. Martin Potter was inches off bringing the sides level, but couldn’t quite reach Gavin Hamm’s superb left wing cross that was placed perfectly between the Village keeper and defence. 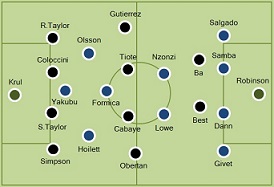 However they escaped and then restricted Rangers to further unsuccessful chances for Declan Cowley and Hamm. Cowley picked up a harsh booking for an unavoidable foul and Rangers went in behind. Rangers started the second half promisingly as they forced a succession of corners and increasing pressure on the Village defence, despite this, Rangers failed to take advantage of their relentless pressure and were reduced to long range efforts as the determined Village defence failed to crack. Village were penned into their own half and defended resiliently. Still Rangers couldn’t make the breakthrough. As Rangers pressed further and defenders became attackers; Village created three or four breakaway chances and their number ten squandered a couple of glorious chances. It stayed 1-0 until roughly two minutes left on the referee’s watch when left back Darren Greep found fellow defender Mick Howells, who pumped the ball forward. Finally the Village defence cracked as one of the defenders could only head the ball up and behind him. Substitute Josh Hannaford pounced and found the net with a good strike and in the process was taken out by the Village keeper. 1-1. It was a small price to pay as the equaliser pushed Rangers on in search of all three points and more high balls were played into the Village area, but none of them paid off and both sides had to settle for a share of the spoils. Final score 1-1. Read more on the match reports page